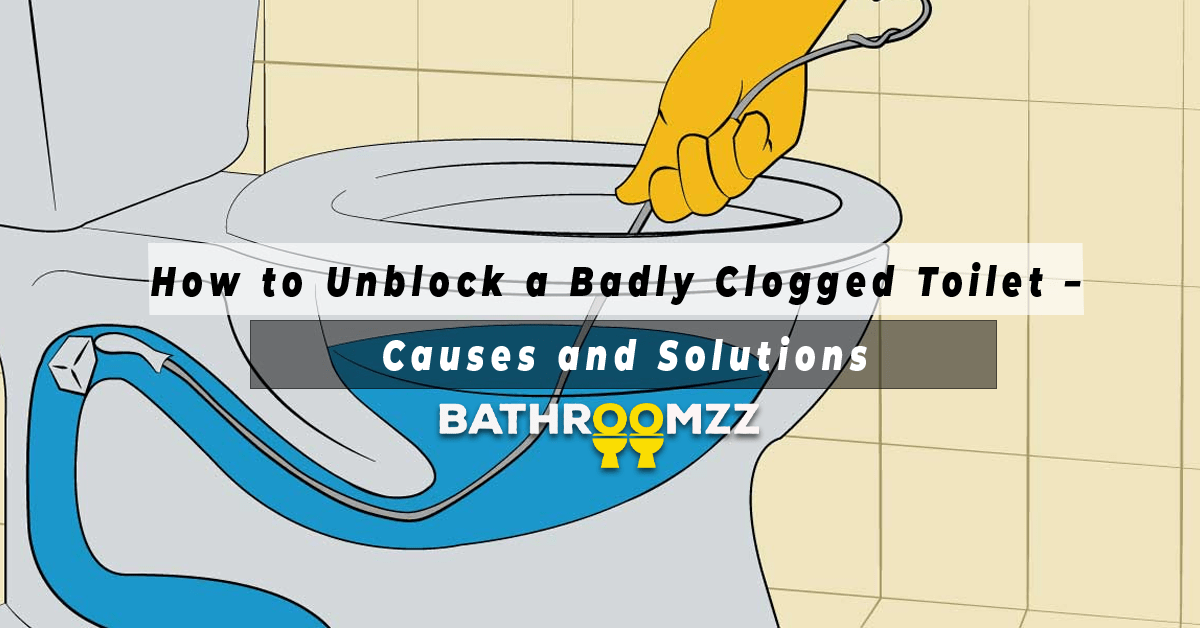 A badly clogged toilet could be a great headache. It does not only make the toilet clogged but also stinks bad and you may have the bad odor spread all over into your bathroom. But, the good thing is, the clogged toilets can be treated by your own self. You do not necessarily have to call a plumber for that.

The unblocking of a clogged toilet depends on how lightly or severely has the toilet been blocked. If the clogging is mild, then treating the toilet with some baking soda and vinegar or some soap cleanser would be enough. This would unclog the material that has caused clogging in a few hours. And then, you can flush to ensure the pathway has been cleared.

On the other hand, if the clogging is hard, this might not work. Then you’ll probably have to move towards the second option, which is using a plunger. A plunger would help you create pressure inside the toilet and then break the clog after a few pushes and pulls.

Further in this article, we would read about what causes a toilet to block and what are the solutions.

What Causes the Toilet Blockage?

Here are some common causes of toilet blockage:

Flushing of Un-Dissolvable Material – Anything that is insoluble and does not dissolve in the toilet water will cause toilet blockage. For example, you flush the makeup wipes, sanitary napkins, or wet towels too often. Currently, you’d believe that everything has flushed and the pathway gets cleared after every flush. But that’s not the case. If not near, this un-dissolvable stuff might get gathered up somewhere in the pathway and would eventually lead to a clogged toilet over time.

Poor Flushing – Also, Sometimes, even poor flushing causes toilet blockage too. You might think that one flush is enough after you’ve used the toilet but actually, it needed another flush to push the entire waste forward. Hence, flushing your toilet efficiently after every use is very important.

Other Reasons – Other than these common causes, there could also be an issue with your toilet flapper, or a low water level inside your toilet tank could also be the reason. Not only this, some blockage in the drain pipes or in the main sewage lines could also lead to toilet blockage. So, in the case of a blocked toilet, you’ll have to figure out what might be the main reason and then work on it.

How to Unblock a Badly Blocked Toilet?

The easiest way is to try a plunger. A plunger works by covering the entire exposed bottom area of the bowl and then creates pressure inside that gradually unblocks the toilet by breaking down what has caused the blockage or simply moving It forward with pressure.

For a plunger to show effective results, make sure there is enough water in the bowl. If there isn’t, add some by yourself. Then put the plunger at an angle that entirely covers up the bottom of the bowl in a way that its rubber seals the area and makes it airtight. Then push and pull the plunger over and over again; at least 12 times.

When you think you’ve plunged enough, remove the plunger and the water would quickly flush if the blockage has been cleared. To ensure that, perform a few flushes and you’ll see water quickly moving down again. If this doesn’t work, try the plunger for 20 minutes and it would probably work.

Use a Different Type of Plunger

If the plunger hasn’t worked for you lately, that is probably because your toilet needs a different kind of plunger. You may go for a Cup plunger, Flange plunger, or Accordion plunger, just according to what you haven’t tried before.

Will a toilet eventually unclog itself?

How to Unblock a Badly Blocked Toilet Without a Plunger?

Well, other than the use of a plunger, there are some other ways that could help you get rid of a blocked toilet. Here they are:

1.  Use a Dishwasher Soap or Cleanser

Wire hangers could also be giver a try. You would simply have to grab an extra hanger at your home and unwind its twists, leaving the hook. Then wrap a thin towel on its one end and grab the hook in your hand. Slowly move the hanger wire with the towel-covered end into the toilet bowl, and deeper. Now wiggle it gently, and it would probably dislodge the clog.

3.  Let the Clog Dissolve Over Time

This is a time-consuming thing but it would work if you aren’t in a hurry. You can try this by either just pouring hot water into the bowl and let it work down the drain, or just pour some cleanser and let it settle down for some time. And then perform 2 or 3 flushes to confirm if it has worked.

4.  Use the Plastic Bottle Technique

The plastic bottle technique greatly works if you know how to make use of the bottle first of all, for this technique, make sure you have rubber gloves on your hands. Also, remove the water from the bowl either by flushing it or if it doesn’t flush, use some old cup to take out the water in some container.

Take a plastic bottle and cut off its bottom. Remove the lid of the bottle and slide your thumb over it. now insert the bottle with its cut-off bottom into the bowl in a way that it seals the bottom of the bowl. Then plunge it up and down and it would create pressure inside. This pressure would pull the clog out and then back into the drain. Now flush the toilet to ensure the blockage has been cleared.

How to prevent toilet blockages?

The least you can do to prevent a toilet from blockage is to avoid flushing anything other than the waste and paper tissues. Because anything that is insoluble in water would eventually clog up in the toilet over time. Another thing that often leads to clogged toilets is poor flushing.

How to unblock a toilet with water pressure?

You can either use a plunger or the plastic bottle technique to unblock the toilet. Both of these techniques create a water pressure inside the toilet that eventually leads to the breakdown of the clogs or moves them forward into the drain with great pressure.

How to Unblock a Toilet with Baking Soda?

Baking soda works like magic for unblocking the blocked toilets. But, baking soda alone wouldn’t really do the job. You’ll need to have both baking soda and vinegar.

The solution of baking soda and vinegar works great for the unclogging of a toilet. Similar to the dishwasher technique, this solution also helps in dislodging the clog eventually. All you have to do is pour a cup of baking soda into the toilet and let it sit for a few minutes. After that, take 1 cup of vinegar and pour it into the bowl as well.

Now, wait for at least 30 minutes until the solution does its job. You’ll see the bubbles and fizz in the bowl after this time. Now perform 2 flushes to make sure the technique worked.

The most common technique that is the first thing to be tried for unblocking the toilet is the use of hot water and dishwasher soap. Hot water also really works for this cause and when combined with a bar of dishwasher soap, it works even better. You’ll have to pour hot water into the bowl but make sure it isn’t boiling hot as it may damage the exterior of the toilet.

Then pour a cup of dishwasher cleanser and let it sit for half an hour at least. The hot water and soap would dislodge the clog eventually and clear the pathways once you flush the toilet.

Things You Should Never Flush Down the Toilet

It is very important to know that only the waste or paper tissues should be flushed. But for a better understanding, here’s a list of the things you should NEVER flush.

But, toilets could also be blocked due to your negligence. To avoid that, make sure you flush properly after every use, clean the toilet with cleansers every day, do not flush away anything other than the waste itself, and maintain the water level in the tank. 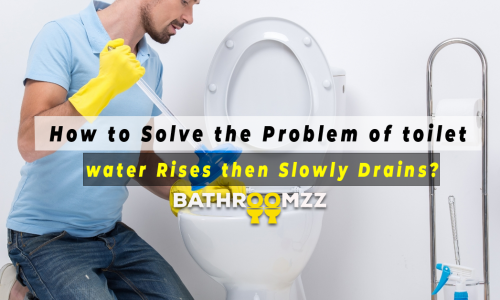 How to Solve the Problem of toilet water Rises then Slowly Drains? 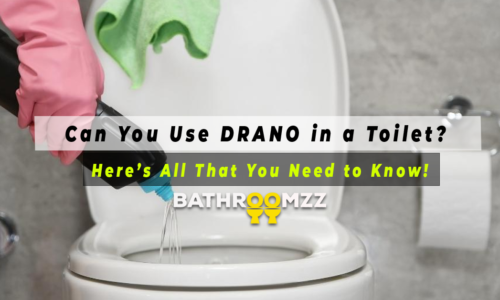 Can You Use DRANO in a Toilet? Here’s All That You Need to Know!